Prettify your desktop with Splashbox

FINAL UPDATE: This app is now offline. The Dropbox API v1 was sunsetted and there are no good alternatives to the gem used for authentication in Splashbox. Farewell, and thanks for all the fish!

I've been a long-standing fan of inspirational desktop photos. When I discovered Unsplash, a service that provides 10 royalty-free high-resolution photos to spruce up my desktops every 10 days, I jumped straight on it.

However, the Unsplash project (which is run by Crew) has been going on for a while, and as such, has accumulated quite a few photos. Downloading each one individually is quite a hassle, which is why a developer named Chris Hopkins came up with an app called Splashbox.

Originally, the app was available as a service online, through the splashboxapp.com URL. Due to what I can only imagine were time constraints to keep it up, Chris decided to stop hosting it himself and instead chose to open-source the app, along with instructions on how to run it.

After setting up a copy of the code to run on Heroku, I thought: Why not open up the app so that others could use it as well?

So that's what I did. Kind of.

Without further ado, I present to you: Raf's Splashbox

Once you are granted access, you can point your operating system's wallpaper settings at the Raf's Splashbox folder in your Dropbox directory (look inside Apps for it), and you're sorted. On a Mac, you go to the following location: 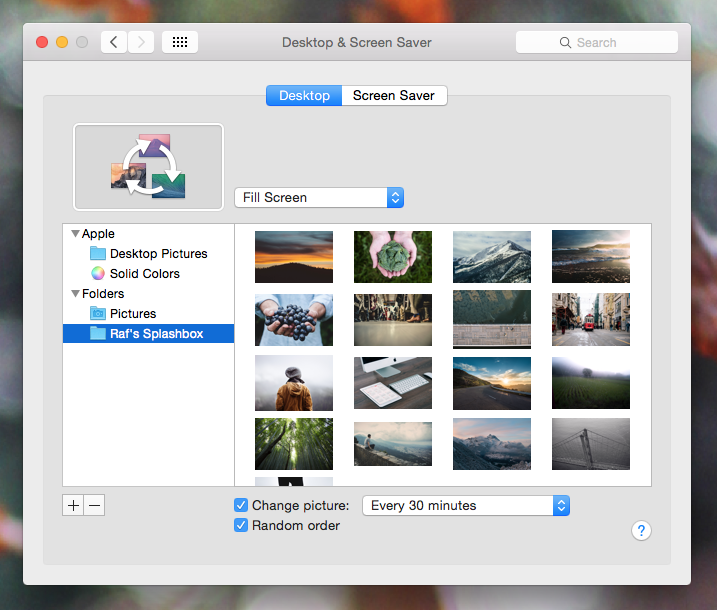 Important Note #1: All accounts are put into a waiting list, so as not to overload the free account in Heroku. I'll clear the waitlist when I remember to do so, but you can always [ping me on Twitter to ask for it](https://twitter.com/intent/tweet?text=@rafaelmagu Hey, I just joined the waitlist for Raf's Splashbox!&source=webclient).

Important Note #2: The initial sync takes a while. And it takes quite a bit of space in your Dropbox account (think upwards of 2GB). If you delete the folder, however, it stops syncing and you'll recover the disk space.

Important Note #3: The app is not served over SSL since that costs a fair bit to do on Heroku, and I'm hosting it for free. The Dropbox auth, though, is all secure and I can't personally see any of your data (access is restricted to the specific folder of your choosing during the authorisation process).

Written in collaboration with: Rafael
Author

Success! Thanks for subscribing to Hey, Rafael!.

Success! Next, complete membership for full access to Hey, Rafael!.

Success! Your membership now is active.